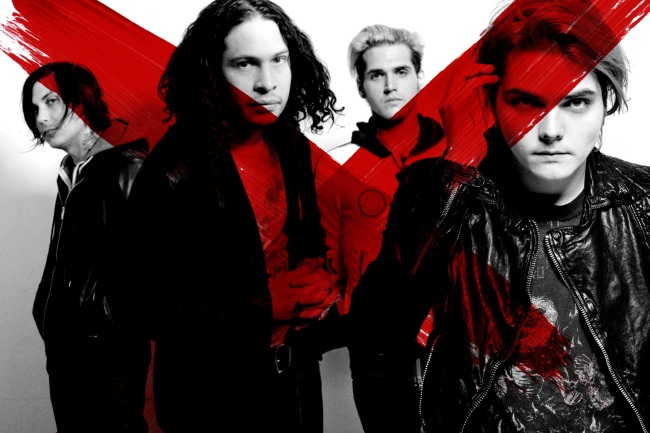 I remember the first time i heard My Chemical Romance. I was fourteen years old, and MCR was months away from exploding onto MTV (for younger readers, YES, MTV really did used to play music) and MySpace bulletins everywhere. In 2005, they would release the hauntingly beautiful music video for ‘Helena’, be mentioned along with bands such as Fall Out Boy, Green Day, and The Killers, and set themselves up for a brilliant career as one of the leading bands of ‘the scene’.

But it’s 2004, and one of my friends (from the church youth group of all places) just put in a mix cd and played the first track -‘I’m Not Okay (I Promise)’. I had no words. I had been flirting with bands that laid outside of the ‘mainstream’ circuit, bands like MxPx, Relient K, and  Five Iron Frenzy. I loved the energy and passion these bands brought to their music.

But they weren’t angry. They were calm, and they were nice. I was a fourteen year old kid living in suburbia. I didn’t want nice. I wanted raw, angry, and a little weird. My Chemical Romance gave me that, and more. About a month later my world would be turned upside down by a record called ‘They’re Only Chasing Safety’ by a little band called underoath. If not for MCR, I might never have seen the light in aggressive music. This was my in.

This past Friday, May 22 2013, My Chemical Romance announced via a very short and slightly shady announcement that they are no longer a band. I can’t really say that I was shocked or surprised, or even sad. When I heard ‘Danger Days’, I told myself that this was probably it for the band. Following the insanely popular sprawling epic of ‘The Black Parade’ with yet another massive concept album seemed like a swansong. I thought “Surely they can’t keep this up. So much thought and brilliance poured into these albums, the next step is either a terrible album or a break-up.” So I was prepared.

That is to say, it makes sense. And it makes sense that everything about the breakup is really sketchy. The band imploded. They were too strange, too brilliant, and too….did i mention strange?

But regardless of all that, they released four albums that captured the imagination and angst of a generation, and surely brought in millions of dollars for Hot Topic.

So here’s to My Chemical Romance. Thank you.